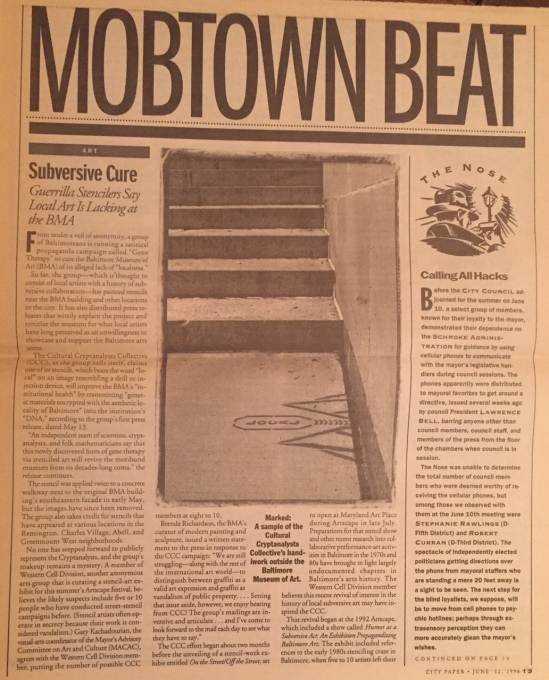 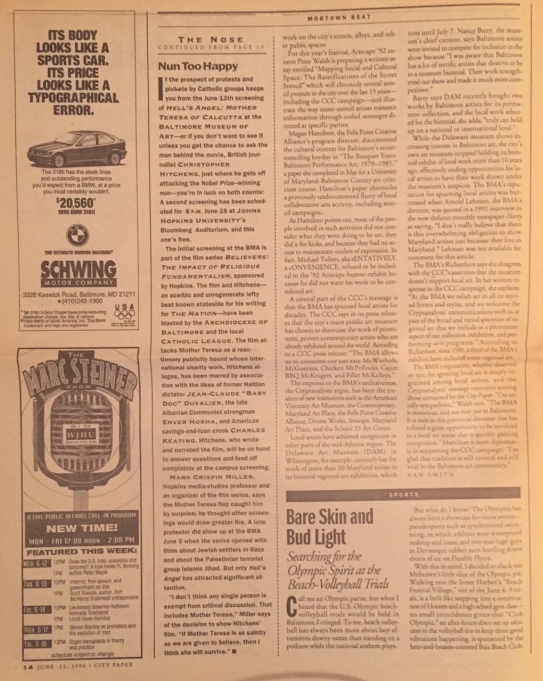 From under a veil of anonymity, a group of Baltimoreans is running a satirical propaganda campaign called “Gene Therapy” to cure the Baltimore Museum of Art (BMA) of its alleged lack of “localness.”

So far, the group – which is thought to consist of local artists with a history of subversive collaboration – has painted stencils near the BMA building and other locations in the city. It has also distributed press releases that wittily explain the project and criticize the museum for what local artists have long perceived as an unwillingness to showcase and support the Baltimore arts scene.

The Cultural Cryptanalysts Collective (CCC), as the group calls itself, claims one of its stencils, which bears the word “local” on an image resembling a drill or injection device, will improve the BMA’s “institutional health” by transmitting “genetic materials encrypted with the aesthetic locality of Baltimore” into the institution’s “DNA,” according to the group’s first press release, dated May 13.

“An independent team of scientists, cryptanalysts, and folk mathematicians say that this newly discovered form of gene therapy via stenciled art will revive the moribund museum from its decades-long coma,” the release continues.

The stencil was applied to a concrete walkway next to the original BMA building’s southeastern facade in early May, but the images have since been removed. The group also takes credit for stencils that have appeared at various locations in the Remington, Charles Village, Abell, and Greenmount West neighborhoods.

No one has stepped forward to publicly represent the Cryptanalysts, and the group’s makeup remains a mystery. A member of Western Cell Division, another anonymous arts groups that is curating a stencil-art exhibit for this summer’s Artscape festival, believes the likely suspects include five or 10 people who have conducted street-stencil campaigns before.  (Stencil artists often operate in secrecy because their work is considered vandalism.) Gary Kachadourian, the visual-arts coordinator of the Mayor’s Advisory Committee on Art and Culture (MACAC), agrees with the Western Cell Division member, putting the number of possible CCC members at eight to 10.

Brenda Richardson, the BMA’s curator of modern painting and sculpture, issued a written statement to the press in response to the CCC campaign: “We are still struggling – along with the rest of the international art world – to distinguish between graffiti as a valid art expression and graffiti as vandalism of public property. … Setting that issue aside, however, we enjoy hearing from CCC! The group’s mailings are inventive and articulate … and I’ve come to look forward to the mail each day to see what they have to say.”

The CCC effort began about two months before the unveiling of a stencil-work exhibit entitled On the Street/Off the Street, set to open at Maryland Art Place during Artscape in late July. Preparations for that stencil show and other recent research into collaborative performance-art activities in Baltimore in the 1970s and 80s have brought to light largely undocumented chapters in Baltimore’s arts history. The Western Cell Division member believes this recent revival of interest in the history of local subversive art may have inspired the CCC.

That revival began at the 1992 Artscape, which included a show called Humor as a Subversive Act: An Exhibition Propagandizing Baltimore Art. The exhibit included references to the early 1980s stenciling craze in Baltimore, when five to 10 artists left their work on the city’s streets, alleys, and other public spaces.

For this year’s festival, Artscape ’92 curator Peter Walsh is preparing a written essay entitled “Mapping Social and Cultural Space: The Ramifications of the Street Stencil” which will chronicle several stencil projects in the city over the last 15 years – including the CCC campaign – and illustrate the way street-stencil artists transmit information through coded messages directed at specific parties.

As Hamilton points out, most of the people involved in such activities did not consider what they were doing to be art; they did it for kicks, and because they had no access to mainstream outlets of expression. In fact, Michael Tolsen, aka tENTATIVELY, a cONVENIENCE, refused to be included in the ’92 Artscape humor exhibit because he did not want his work to be considered art.

A central part of the CCC’s message is that the BMA has spurned local artists for decades. The CCC says in its press releases that the city’s main public art museum has chose to showcase work of prominent, proven contemporary artists who are already exhibited around the world. According to a CCC press release: “The BMA allows us to consume our cut-rate McWarhols, McGustons, Chicken McPollocks, Cajun BBQ McKrugers, and Fillet McKelleys.”

The response to the BMA’s exclusiveness, the Cryptanalysts argue, has been the creation of new institutions such as the American Visionary Art Museum, the Contemporary, Maryland Art Place, the Fells Point Creative Alliance, Diverse Works, Artscape, and the School 33 Art Center.

Local artists have achieved recognition in other parts of the mid-Atlantic region. The Delaware Art Museum (DAM) in Wilmington, for example, currently has the work of more than 30 Maryland artists in its biennial regional-art exhibition, which runs until July 7. Nancy Batty, the museum’s chief curator, says Baltimore artists were invited to compete for inclusion in the show because “I was aware that Baltimore has a lot of terrific artists that deserve to be in a museum biennial. Their work strengthens our show and made it much more competitive.”

Batty says DAM recently bought two works by Baltimore artists for its permanent collection, and the local work selected for the biennial, she adds, “truly can hold up on a national or international level.”

While the Delaware museum shows increasing interest in Baltimore art, the city’s own art museum stopped holding its biennial exhibit of local work more than 10 years ago, effectively ending opportunities for local artists to have their work shown under the museum’s auspices. The BMA’s reputation for spurning local artists was buttressed when Arnold Lehman, the BMA’s director, was quoted in a 1991 interview in the now-defunct monthly newspaper Harry as saying, “I don’t really believe that there is this overwhelming obligation to show Maryland artists just because they live in Maryland.” Lehman was not available for comment for this article.

The BMA’s Richardson says she disagrees with CCC’s assertion that the museum doesn’t support local art. In her written response to the CCC campaign, she explains: “At the BMA we relish art in all its myriad forms and styles, and we welcome the Cryptanalysts’ communications with us as part of the broad and varies spectrum of regional art that we include as a prominent aspect of our collection, exhibition, and performing-arts programs.” According to Richardson, since 1980, a third of the BMA’s exhibits have included some regional art.

The BMA’s reputation, whether deserved or not, for ignoring local art is deeply ingrained among local artists, and the Cryptanalysts’ message resonates among those contacted by City Paper. “I’m totally sympathetic,” Walsh says. “The BMA is notorious, and not even just in Baltimore. It is seen as this provincial dinosaur that has refused a great opportunity to be involved in a local art scene that is quickly gaining recognition.” Hamilton is more diplomatic in supporting the CCC campaign: “I’m glad that tradition is still around and still vital in the Baltimore art community.”