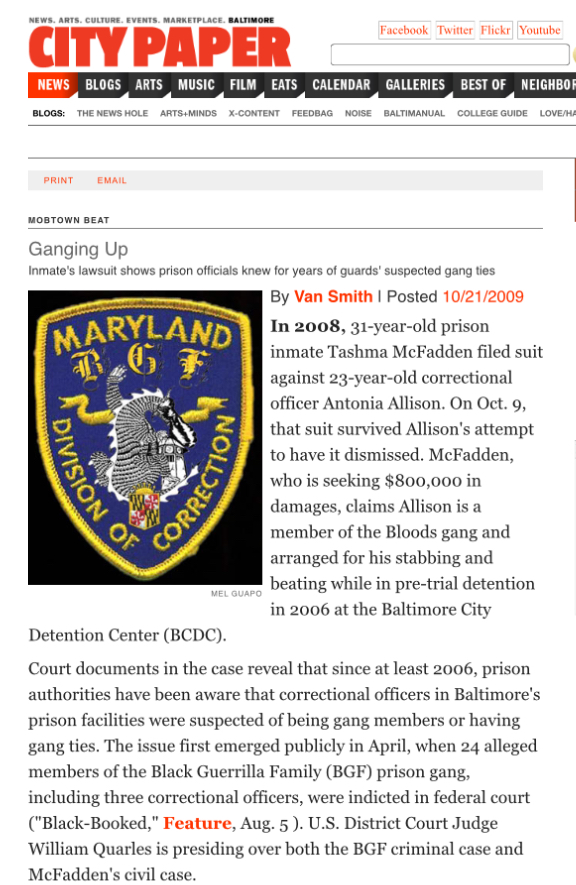 In 2008, 31-year-old prison inmate Tashma McFadden filed suit against 23-year-old correctional officer Antonia Allison. On Oct. 9, that suit survived Allison’s attempt to have it dismissed. McFadden, who is seeking $800,000 in damages, claims Allison is a member of the Bloods gang and arranged for his stabbing and beating while in pre-trial detention in 2006 at the Baltimore City Detention Center (BCDC).

Court documents in the case reveal that since at least 2006, prison authorities have been aware that correctional officers in Baltimore’s prison facilities were suspected of being gang members or having gang ties. The issue first emerged publicly in April, when 24 alleged members of the Black Guerrilla Family (BGF) prison gang, including three correctional officers, were indicted in federal court (“Black-Booked,” Feature, Aug. 5 ). U.S. District Court Judge William Quarles is presiding over both the BGF criminal case and McFadden’s civil case.

In his lawsuit, McFadden, who was convicted of drug-dealing after the attack and is serving a seven-year sentence, contends that after he had an argument with Allison, she unlocked his cell door to allow inmates who were Bloods members into his cell, resulting in an attack that inflicted 32 stab wounds on his upper body. He also claims that Allison withheld medical attention from him after the attack and that prison officials failed to investigate the incident properly. McFadden, who is represented by pro bono attorney Aaron Casagrande, said in a deposition that since the attack, he has become a Bloods member in an effort to enhance his safety as an inmate.

Allison, who is represented by Assistant Attorney General Beverly Hughes, denies McFadden’s claims, including the contention that she’s a Bloods member. She acknowledges, though, that if an inmate’s cell door was unlocked at the time of the attack, either she or a trainee who was with her, Tynisha Crew, must have unlocked it. Hughes declined to comment on the case.

Quarles’ ruling says that McFadden’s claims merit a jury trial. But what happened to McFadden is just the tip of the iceberg. Though this year’s BGF indictments drew public attention to the issue of prison guards suspected of aiding gangs, McFadden’s case reveals that the state Department of Public Safety and Correctional Services (DPSCS) has been aware of it for years–and that in 2007, the warden at BCDC, William Filbert, ordered that investigative reports of the problem cease. Evidence in the case–in particular, motions filed over the summer by both McFadden and Allison–also shows that the problem is believed to involve many more correctional officers than the three accused of working with the BGF, none of whose names appear in the McFadden case documents.

McFadden’s lawsuit has revealed that in late 2006 and early 2007, 16 correctional officers, including Allison, were identified as being gang members or having gang ties in two confidential DPSCS investigative reports. According to DPSCS spokesman Rick Binetti, six of the 16 COs named in the two reports no longer work for the department, though he adds that state personnel policy dictates that he can’t say why they left their jobs. The remaining 10, including Allison, still work for the department, he says.

“The brutal attack suffered by my client, while abhorrent in its own right,” Casagrande says in an e-mail, “is only a symptom of a much larger problem at the Baltimore City Detention Center–that gangs have been able to infiltrate the ranks of BCDC correctional officers. I would hope that the case leads to more stringent screening of correctional officers and a more thorough review of policies and procedures so that a similar attack does not occur again in the future, and if one does occur, that it is properly and timely investigated.”

While Binetti could not comment specifically about McFadden’s case, he says that generally the department’s “efforts to root out and stem corrupt behavior among staff actually begins before they are hired. We are committed to investigating and hiring the best, most qualified candidates. Over the last three years, 68 percent of correctional officer applicants were rejected because they didn’t pass through the DPSCS background checks and investigation process.” He adds that, in April of this year, “the Correctional Training Division voted to adopt new, more stringent regulations requiring agencies to include verifying gang membership into the applicant background check.”

As for the department’s record of firing bad actors, Binetti says that from 2007 through March 2009, 71 members of correctional staff “have been terminated because of criminal arrests, contraband, or fraternization with inmates.” Unless corrections employees break the law or are found to have violated the department’s code of conduct, however, he says, they “like normal U.S. citizens are free to associate with whomever they choose,” including gang members.

The department’s code of conduct does not specifically mention gang members, but it does include stringent requirements prohibiting correctional officers from all but officially sanctioned interaction with inmates or their family and friends, whether on or off duty.

The confidential investigative reports naming suspect correctional officers that came to light in McFadden’s lawsuit were written by Lt. Santiago Morales, who at the time they were written worked in the Criminal Intelligence Unit of the state Department of Pretrial and Detention Services. The reports do not specify evidence implicating the officers, but state that the “information was provided by several confidential informants whose information proved to be reliable in the past.” In some cases, Morales misspelled the correctional officers names, but City Paper confirmed their identities with Binetti and through court records.

Binetti says that of these 16 COs, six–Crew, Rheubottom, Barnes, Haynes, Burrell, and Hinton–are no longer employed by the department. He assured City Paper that he would contact the supervisors of those still employed to let them know that City Paperwould be reporting their names, based on the investigative documents that emerged in McFadden’s case. Binetti declined City Paper‘s request to interview Filbert and Morales.

In his Feb. 2009 deposition in McFadden’s case, Morales stated that Duwuane Crew was “terminated” because “he passed handcuff keys on to inmates to assist them stab BGF gang members.” He also stated that Jamal Hinton was “terminated for his activity in gangs” after law enforcement “found gang paraphernalia, gang garb, and pictures of him holding weapons, making gang signs in his home during a raid.” Tiffani Curbeam, Morales said, “is currently still under investigation, but there was numerous statements of her bringing contraband in the institution for the BGF.” He added that “the other members, from what I understand, because I’m not in the intelligence unit anymore, might still be under investigation.”

Court documents in the McFadden case state that the practice of making reports such as those prepared by Morales ceased in early 2007, “pursuant to Warden Filbert’s instructions.” In an attempt to contact Morales for this article, City Paper called the intelligence unit where Morales used to work, and confirmed that he no longer works there. The woman who answered the phone said, “He’s actually on the BCDC night shift now,” though Binetti could confirm only that Morales still works for the Department of Pretrial and Detention Services.

The three prison guards indicted in the BGF conspiracy case–Asia Burrus, Musheerah Habeebullah, and Takevia Smith–have entered guilty pleas before Quarles, and are due to be sentenced in the coming weeks and months. All three have admitted to contraband smuggling, which helped the BGF’s alleged narcotics-distribution conspiracy in the Maryland prison system.