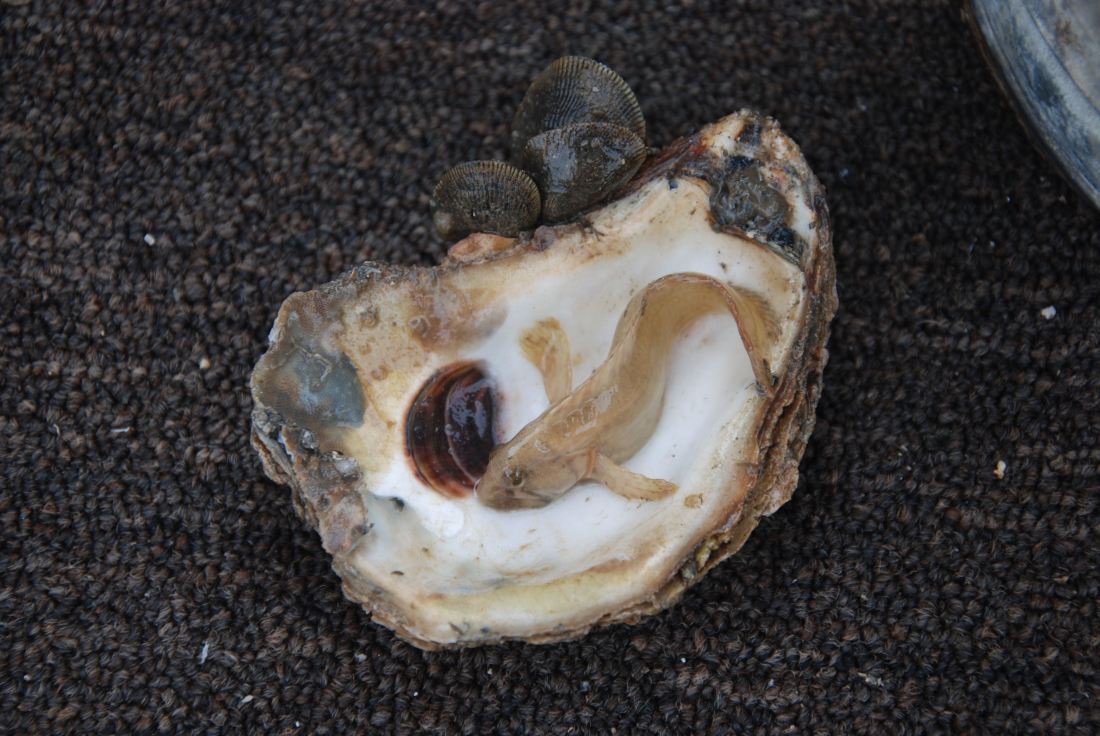 I love September. It means Chesapeake Bay oysters, which local traditions dictate should be had only in those months with “r”s in their names, start coming to market. And that means the holidays are coming, when oysters will be part of the festivities all fall and winter long.

Maybe oysters aren’t a part of the winter holidays in your house, but maybe they should be. Each raw oyster opens like a holiday gift you know you’re getting: a cold, salty, slippery taste treat, packed with pleasing cholesterol, but also with healthful magnesium, phosphorous, protein, iron, zinc, copper, manganese, selenium, and vitamins D and B12. Prying them open with an oyster knife takes a little getting used to, like when young children first struggle to open wrapped presents. Once you become deft at it, though, a veritable oyster shower ensues. Pop them open one after the other, scrape the muscle that anchors the meat to the shell—being careful not to spill the flavorful oyster liquor—and slurp them down.

Sometimes there’s a bonus gift inside: a tiny pearl, or a scrappy little pea crab, living symbiotically among the folds of the oyster meat. The pearls you can save as mementos—or even the delicate pea crab, if, like my 2-year-old, you find the little crustaceans fascinating. After one turned up in a plate of oysters we were eating this fall, she carried it around in her palm for the rest of the afternoon, showing it to all who cared to listen. When it died, she saved its frail shell in a small wooden dish for days, until it finally fell to pieces in her hands. She still talks about it, hoping to come across another.

Oysters are ever-present at fall and winter gatherings among my crew of friends. When we get together in the cold months, someone usually brings a cooler full of oysters on ice, a shucking glove, and an oyster knife, and people take turns opening them at an outside table for all to enjoy. If there’s enough snow on the ground, a good way to present oysters is stuffed in a snow bank, so partiers can simply pluck them out one at a time when they’re ready to shuck. Either way, it ensures the party has an outside contingent that’s not just the smokers.

A long-running Thanksgiving feast at a friend’s home, where there’s a craftily masoned fire pit in the back yard, generally features the host’s specialty: As a spitted leg of lamb turns, he roasts oysters next to the fire, spooning melted garlic butter over them just before handing them to guests. Noreen Eberly, seafood marketing director for the Maryland Department of Natural Resources (DNR) Fisheries Service, says this is called an “oyster scald,” and it’s a Chesapeake Bay tradition. “On a cool day,” she says, “it’s delightful to enjoy the nice warm oysters outside by the fire.”

Eberly cites three other well-established Chesapeake Bay holiday traditions involving oysters: oyster stuffing in the Thanksgiving turkey, oyster stew on Christmas Eve, and baked oysters on Christmas day. “I also give away oysters as gifts, just to friends around the holidays,” she adds.

“Oyster stew is one of the things I look forward to on the holidays,” says Greg Barranco, communications and government liaison for the U.S. Environmental Protection Agency’s Chesapeake Bay Program. “My mom always talks about my great-grandmother’s oyster stew for Christmas Eve, and she makes it every year.” Barranco now lives in Annapolis, but he grew up in Towson and, later, Timonium. “My parents live in Oxford now,” on Maryland’s Eastern Shore, he says, “so now my mom gets oysters right from a boat down the street for the Christmas Eve stew.”

Barranco worries about the bay’s declining oyster population. “The numbers on the fishery are so bad,” he says. A just released study recommends a moratorium, since fishing, disease, and habitat loss has caused the Upper Chesapeake’s population to plummet an estimated 99.7 percent since the early 1800s and 92 percent since 1980. “But if my mom can’t get them from the bay, she’ll find oysters to make stew on Christmas Eve one way or another. It’ll cost her more, getting them from PEI [Prince Edward Island in Canada] or somewhere, but she’ll get them.”

These holiday oyster dishes are strikingly simple to make. For the oyster stuffing, just add a pint of raw oysters to your favorite stuffing recipe. Oyster stew involves melting butter; adding garlic, salt, and pepper; stirring in milk and half-and-half; and quickly cooking oysters in the mixture before adding a touch of sherry, parsley, and cayenne pepper to each serving. Baked oysters can get more complicated, but baking them shucked on the half shell in a hot oven (450 to 500 degrees), perched atop a savory mixture of, say, Gruyère cheese, spinach, and seasoned bread crumbs, until the oysters’ edges start to curl, is sure to make holiday revelers think you’re a proper gourmet. (To learn more about holiday cooking with oysters and other Chesapeake Bay seafood, Eberly recommends DNR’s free holiday recipe brochure. Send a self-addressed stamped envelope to DNR Fisheries Service, B-2, 580 Taylor Ave., Annapolis, Md., 21401, and write “Seafood” on the outside of the envelope.)

If you’re not into including oysters in your holiday feasts, there are other ways to make them part of the festivities. Using the shells to make Christmas tree decorations, or to adorn gift-wrapping, is a favorite. “My Christmas tree is always filled with oyster shells,” Eberly says. “Some I make on my own, and some I get in craft stores.” The insides of the shells can be painted with holiday scenes, or cutouts of holiday cards can be pasted on them, or glue and glitter can be used to make them sparkle.

Giving oyster plates as holiday gifts is a way to get in good with the oyster aficionado in your life. These specially made dishes with molded indentations to hold oysters on the half shell, along with the condiments often served with them, such as lemons or sauces, can be highly collectible—or simply utilitarian, if oysters are a regular part of one’s diet. My father-in-law is an oyster-plate collector who hangs them on the wall above his bar at home, and Mama’s on the Half Shell, a restaurant in Canton, has its collection similarly displayed. This hobby can get quite refined: The eBay oyster-plate page generally has about 1,000 plates on auction, with starting prices at anywhere from $10 to hundreds of dollars.

While oysters are often associated with rarefied elegance or hypersexuality, I just think of them as something delectable to go with beer, white wine, or bubbly in the cold months. They arrive with Labor Day’s observance of work and toil, but they stay all throughout the holidays, when I get to try my best to enjoy the fruits of my labor with friends and family. In fact, I think I’ll go get some right now.