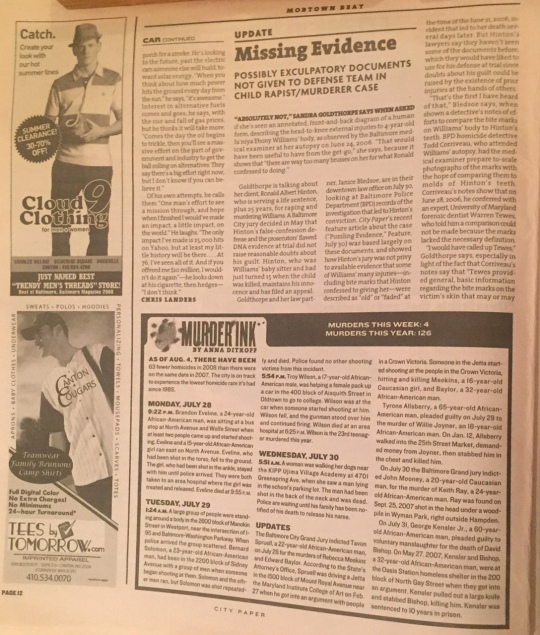 “Absolutely not,” Sandra Goldthorpe says when asked if she’s seen an annotated, front-and-back diagram of a human form, describing the head-to-knee external injuries to 4-year-old Ja’niya Ebony Williams’ body, as observed by the Baltimore medical examiner at her autopsy on June 24, 2006. “That would have been useful to have from the get-go,” she says, because it shows that “there are way too many bruises on her for what Ronald confessed to doing.”

Goldthorpe is talking about her client, Ronald Albert Hinton*, who is serving a life sentence, plus 25 years, for raping and murdering Williams. A Baltimore City jury decided in May that Hinton’s false-confession defense and the prosecutors’ flawed DNA evidence at trial did not raise reasonable doubts about his guilt. Hinton, who was Williams’ baby sitter and had just turned 15 when the child was killed, maintains his innocence and has filed an appeal.

Goldthorpe and her law partner, Janice Bledsoe, are in their downtown law office on July 30, looking at Baltimore Police Department (BPD) records of the investigation that led to Hinton’s conviction. City Paper‘s recent feature article about the case (“Puzzling Evidence,” Feature, July 30) was based largely on these documents, and showed how Hinton’s jury was not privy to available evidence that some of Williams’ many injuries–including bite marks that Hinton confessed to giving her–were described as “old” or “faded” at the time of the June 21, 2006, incident that led to her death several days later. But Hinton’s lawyers say they haven’t seen some of the documents before, which they would have liked to use for his defense at trial since doubts about his guilt could be raised by the existence of prior injuries at the hands of others.

“That’s the first I have heard of that,” Bledsoe says, when shown a detective’s notes of efforts to compare the bite marks on Williams’ body to Hinton’s teeth. BPD homicide detective Todd Corriveau, who attended Williams’ autopsy, had the medical examiner prepare to-scale photographs of the marks with the hope of comparing them to molds of Hinton’s teeth. Corriveau’s notes show that on June 28, 2006, he conferred with an expert, University of Maryland forensic dentist Warren Tewes, who told him a comparison could not be made because the marks lacked the necessary definition.

“I would have called up Tewes,” Goldthorpe says, especially in light of the fact that Corriveau’s notes say that “Tewes provided general, basic information regarding the bite marks on the victim’s skin that may or may not be of relevance” at trial, and that “details” of that information were not included in the notes. “I would want to know more about that,” Goldthorpe says. “And we didn’t get the to-scale photographs of the bite marks, which would have been very helpful” Bledsoe says.

“In fact, I had never seen any of Corriveau’s notes concerning the autopsy,” which showed that the detective described “faded” bite marks on Williams’ buttocks. “I would have wanted to ask him about that when he was on the stand,” Bledsoe says, adding that “I’m a little concerned about [Corriveau] saying [in his notes] there were prior bite marks and then [prosecutors Joanne Stanton and Temmi Rollock] not giving that [information] to us.”

Baltimore City State’s Attorney’s Office spokeswoman Margaret Burns says “prosecutors followed the law and complied with Maryland’s discovery rules and disclosed all evidence” to Hinton’s defense attorneys. Though the office has what’s called an “open file policy,” in which defense attorneys have access to everything the prosecution has, it has nonetheless long been criticized for failures to provide exculpatory information. Bledsoe, in fact, is representing another Baltimore defendant, Kenneth Perry, who won a new murder trial because of the state’s failure to provide exculpatory evidence at his first trial when he was convicted in 2001.

Bledsoe is hesitant to argue, based on what documents she knows she did not have at trial, that Stanton and Rollock failed to provide her with exculpatory evidence, as required. “Is it exculpatory? It’s right on the line,” she asserts. “It might be a cumulative thing,” in which, taken altogether, documentation not provided to the defense could have been used to persuade the jury to have reasonable doubts about Hinton’s guilt.

Hinton confessed to biting Williams, for instance, but the jury knew that DNA recovered from the bite wounds did not come from Hinton; in fact, female DNA was recovered from bite marks on the upper thigh. Thus, the dental expert’s conclusions about the size of the bite marks, as documented in Corriveau’s to-scale photographs, may have been useful to the defense in further suggesting to the jury that Hinton could not have bitten Williams, despite his confession. But Hinton’s lawyers didn’t know about the dental expert, so they didn’t know to explore the possibilities of what he might say in front of a jury.

City Paper attempted to contact Tewes to ask him what he told Corriveau about the photographs of the bite marks. E-mails including detailed questions sent to him and the University of Maryland Dental School media office got no response, and neither did multiple phone messages.

Bledsoe acknowledges that the prosecutors did provide her with some documentation of older injuries on Williams’ body that the jury never saw because she was frustrated in her efforts to elicit corroborating testimony.

“I’m trying to be self-critical,” she says. Bledsoe, despite her evidentiary frustrations, emphasized the prior injury theory in her closing arguments at trial.

In particular, Bledsoe’s files contain documentation that the doctor who cared for Williams at the hospital observed “old bites on chest, and left thigh,” and that one of the medics at the scene of the incident noted “bruises were older” than indicated by Hinton’s interpretation of what injured her–that she had just fallen off the bed.

The doctor’s observations appeared in the search-warrant application in the case that was filed before Hinton’s confession, but not in the one filed afterward, perhaps, Bledsoe suggests, “because his confession was not consistent with old bruises and bite marks,” so the phrase was omitted from the second application. The medic’s comment, Bledsoe continues, were contained in a transcript that was provided to the defense after the start of the trial, so she missed it in the rush to prepare.

Goldthorpe takes a phone call while Bledsoe continues to go through City Paper‘s documents from the BPD files. It’s Steven Drizin calling for Bledsoe. Goldthorpe takes a message: Drizin is the legal director of the Center on Wrongful Convictions at Northwestern University School of Law in Chicago, and he has just read the City Paperarticle about Hinton.

Drizin specializes in juvenile false confessions. As of press time, Drizin and Bledsoe had not yet had the opportunity to discuss the case. But Hinton’s mother, Francine Toney, who is convinced by the DNA evidence that her son falsely confessed, says any attention to the case by a specialist such as Drizin “is hope, and we need hope.”

*Ronald Hinton is the son of the late Baltimore Police Department trainee Sean Hinton , whose body in 1992 was found floating off Manhattan with his wrists tied in front of him by the drawstrings of his jacket, and whose death was ruled a suicide despite allegations of police corruption immediately prior.