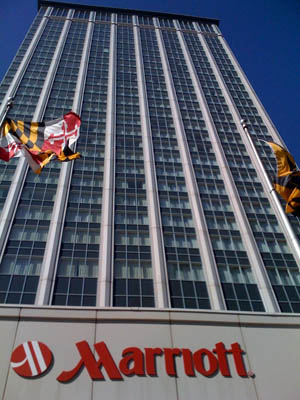 To hear his attorney tell it, Edward Aboagye is an immigrant success story. The slight, bespectacled 27-year-old Morgan State University senior, majoring in finance and accounting, came to the United States from Ghana nine years ago, and married in 2005. The Laurel couple became the parents of twins in January. He’s a resident alien with a green card who owns a lawfully obtained handgun and a car-dealing business in Pigtown. He has no prior record of criminal behavior.

But according to U.S. Attorney Albert David Copperthite, Aboagye is believed to be part of a heroin-smuggling conspiracy that used a courier to swallow five “pellets” of the drug, which were delivered on March 14 “by natural processes” to co-conspirators at a Marriott Waterfront Hotel room (pictured) rented by Aboagye.

In all, the hotel housekeeping crew found a half-kilogram of heroin worth about $45,000 in Aboagye’s room safe and $6,200 in cash behind the counter in the bathroom. Another $4,900 was recovered from a jacket and a purse. A later search of Aboagye’s Pigtown business address turned up more heroin, some marijuana, a .40-caliber pistol registered to Aboagye, and 28 bullets in two magazines.

In open court on March 19, Aboagye’s attorney, Ivan Bates, tells U.S. District Court judge Paul Grimm that his client is not someone who should be locked up pending trial on federal drug-conspiracy charges.

“He’s a family man that is trying to be a student,” Bates says, adding that aspects of the government’s case require a “leap and a stretch” to be believable.

“He leads two lives,” the prosecutor contends. One “with his wife and children in Laurel–and they don’t know what he’s doing in Baltimore.”

Noting that the government’s contentions are as yet “untested,” and that the defense maintains that Aboagye was at the hotel “to sell a man a car”–not to engage in a drug transaction–Judge Grimm allows Aboagye to be on monitored home detention with $50,000 in unsecured bond put up by his wife.

“There are a number of factual matters that [Aboagye] intends to challenge at trial,” the judge notes.

Another Ghanian living in Elizabeth, N.J., Mohammed Marga, also was charged in the conspiracy with Aboagye. Both, according to the charging papers, were interviewed by law enforcers after their arrests, as was a woman–20-year-old Stanina Akonnor–who was initially detained with them, but later released without charges.

Whereas Aboagye denied knowledge of the recovered heroin and money, and claimed he was at the hotel to conduct a car sale, Marga told investigators that he met with Aboagye at the hotel room, where Aboagye told him to call a man named Malik to arrange a heroin sale. On March 13, Marga says, Aboagye drove him to meet and set up the transaction with Malik, who Marga described as a stocky, dreadlocked black male, about 5 feet 9 inches, driving a black Range Rover.

Once the two were arrested the next day, though, the alleged drug deal never went through. Malik was displeased, as was evident from a voicemail he left on Marga’s phone. The voicemail, the charging papers contend, “showed that Malik was upset that they did not show up to deliver the heroin and did not call him to let him know what was going on. Additionally, Malik said that he was not going to deal with them anymore.”

Aboagye’s Baltimore car business, Asco Global Company LLC, is based at 824 Washington Blvd. Its incorporation papers describe it as a “wholesale automobile/vehicle dealer” also engaged in the “import and export of general goods.” At 3:13 a.m. on Jan. 22, Aboagye was clocked by police in Howard County going 85 miles per hour in a 1991 Acura with Pennsylvania plates, heading south on I-95. He is scheduled for a March 25 trial on the resulting speeding ticket.

The Marriott Waterfront’s director of sales and marketing, Rob McCulloch, tells City Paper the hotel does “not have any official comment” on the incident. When asked if large amounts of heroin had been found at the hotel before, McCulloch says, “Not that I’m aware of.”