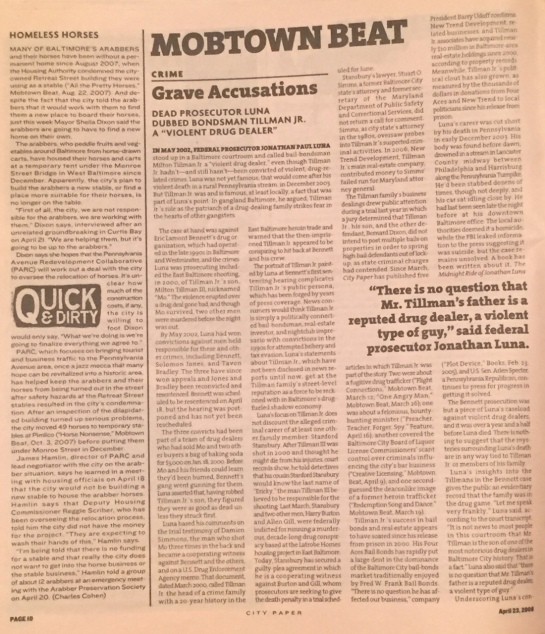 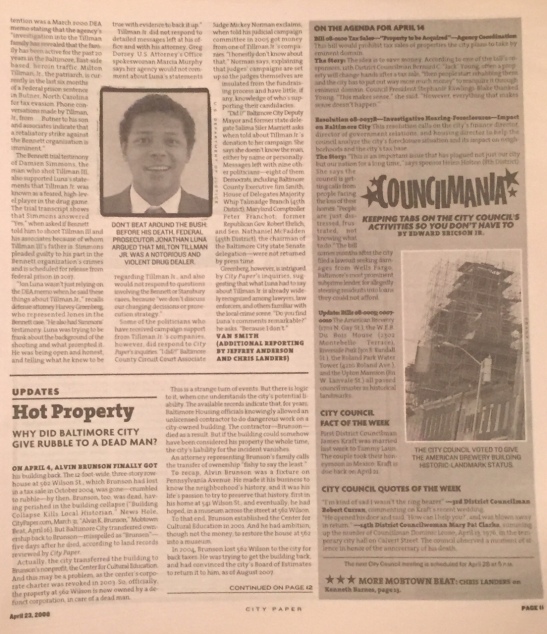 In May 2002, federal prosecutor Jonathan Paul Luna stood up in a Baltimore courtroom and called bail-bondsman Milton Tillman Jr. a “violent drug dealer,” even though Tillman Jr. hadn’t–and still hasn’t–been convicted of violent, drug-related crimes. Luna was not yet famous; that would come after his violent death in a rural Pennsylvania stream, in December 2003. But Tillman Jr. was and is famous, at least locally, a fact that was part of Luna’s point: In gangland Baltimore, he argued, Tillman Jr.’s role as the patriarch of a drug-dealing family strikes fear in the hearts of other gangsters.

The case at hand was against Eric Lamont Bennett’s drug organization, which had operated in the late 1990s in Baltimore and Westminster, and the crimes Luna was prosecuting included the East Baltimore shooting, in 2000, of Tillman Jr.’s son, Milton Tillman III, nicknamed “Mo.” The violence erupted over a drug deal gone bad, and though Mo survived, two other men were murdered before the night was out.

By May 2002, Luna had won convictions against men held responsible for these and other crimes, including Bennett, Solomon Jones, and Tavon Bradley. The three have since won appeals and Jones and Bradley been reconvicted and resentenced. Bennett was scheduled to be resentenced on April 18, but the hearing was postponed and has not yet been rescheduled.

The three convicts had been part of a team of drug dealers who had sold Mo and two other buyers a bag of baking soda for $3,000 on Jan. 18, 2000. Before Mo and his friends could learn they’d been burned, Bennett’s gang went gunning for them. Luna asserted that, having robbed Tillman Jr.’s son, they figured they were as good as dead unless they struck first.

Luna based his comments on the trial testimony of Damien Simmons, the man who shot Mo three times in the back and became a cooperating witness against Bennett and the others, and on a U.S. Drug Enforcement Administration memo. That document, dated March 2000, called Tillman Jr. the head of a crime family with a 20-year history in the East Baltimore heroin trade and warned that the then-imprisoned Tillman Jr. appeared to be conspiring to hit back at Bennett and his crew.

The portrait of Tillman Jr. painted by Luna at Bennett’s first sentencing hearing complicates Tillman Jr.’s public persona, which has been forged by years of press coverage. News consumers would think Tillman Jr. is simply a politically connected bail-bondsman, real-estate investor, and nightclub impresario with convictions in the 1990s for attempted bribery and tax evasion. Luna’s statements about Tillman Jr., which have not been disclosed in news reports until now, get at the Tillman family’s street-level reputation as a force to be reckoned with in Baltimore’s drug-fueled shadow economy.

Luna’s focus on Tillman Jr. does not discount the alleged criminal career of at least one other family member: Stanford Stansbury. After Tillman III was shot in 2000 and thought he might die from his injuries, court records show, he told detectives that his cousin Stanford Stansbury would know the last name of “Ericky,” the man Tillman III believed to be responsible for the shooting. Last March, Stansbury and two other men, Harry Burton and Allen Gill, were federally indicted for running a murderous, decade-long drug conspiracy based at the Latrobe Homes housing project in East Baltimore. Today, Stansbury has secured a guilty-plea agreement in which he is a cooperating witness against Burton and Gill, whom prosecutors are seeking to give the death penalty in a trial scheduled for June.

The Tillman family’s business dealings drew public attention during a trial last year in which a jury determined that Tillman Jr., his son, and the other defendant, Bernard Dixon, did not intend to post multiple bails on properties in order to spring high-bail defendants out of lockup, as state criminal charges had contended. Since March, City Paper has published five articles in which Tillman Jr. was part of the story. Two were about a fugitive drug trafficker (“Flight Connections,” Mobtown Beat, March 12; “One Angry Man,” Mobtown Beat, March 26); one was about a felonious, bounty-hunting minister (“Preacher, Teacher, Forger, Spy,” Feature, April 16); another covered the Baltimore City Board of Liquor License Commissioners’ scant control over criminals influencing the city’s bar business (“Creative Licensing,” Mobtown Beat, April 9); and one second-guessed the deaconlike image of a former heroin trafficker (“Redemption Song and Dance,” Mobtown Beat, March 19).

Tillman Jr.’s success in bail bonds and real estate appears to have soared since his release from prison in 2000. His Four Aces Bail Bonds has rapidly put a large dent in the dominance of the Baltimore City bail-bonds market traditionally enjoyed by Fred W. Frank Bail Bonds. “There is no question he has affected our business,” company President Barry Udoff confirms. New Trend Development, related businesses, and Tillman Jr. associates have acquired nearly $10 million in Baltimore-area real-estate holdings since 2000, according to property records. Meanwhile, Tillman Jr.’s political clout has also grown, as measured by the thousands of dollars in donations from Four Aces and New Trend to local politicians since his release from prison.

Luna’s career was cut short by his death in Pennsylvania in early December 2003. His body was found before dawn, drowned in a stream in Lancaster County, midway between Philadelphia and Harrisburg along the Pennsylvania Turnpike. He’d been stabbed dozens of times, though not deeply, and his car sat idling close by. He had last been seen late the night before at his downtown Baltimore office. The local authorities deemed it a homicide, while the FBI leaked information to the press suggesting it was suicide, but the case remains unsolved. A book has been written about it, The Midnight Ride of Jonathan Luna (“Plot Device,” Books, Feb. 23, 2005), and U.S. Sen. Arlen Specter, a Pennsylvania Republican, continues to press for progress in getting it solved.

The Bennett prosecution was but a piece of Luna’s caseload against violent drug dealers, and it was over a year and a half before Luna died. There is nothing to suggest that the mysteries surrounding Luna’s death are in any way tied to Tillman Jr. or members of his family.

Luna’s insights into the Tillmans in the Bennett case gives the public an evidentiary record that the family was in the drug game. “Let me speak very frankly,” Luna said, according to the court transcript. “It is not news to most people in this courtroom that Mr. Tillman is the son of one of the most notorious drug dealers in Baltimore City history. That is a fact.” Luna also said that “there is no question that Mr. Tillman’s father is a reputed drug dealer, a violent type of guy.”

Underscoring Luna’s contention was a March 2000 DEA memo stating that the agency’s “investigation into the Tillman family has revealed that the family has been active for the past 20 years in the Baltimore, East-side based, heroin traffic. Milton Tillman, Jr., the patriarch, is currently in the last six months of a Federal prison sentence in Butner, North Carolina for tax evasion. Phone conversations made by Tillman, Jr., from . . . Butner to his son and associates indicate that a retaliatory strike against the Bennett organization is imminent.”

The Bennett trial testimony of Damien Simmons, the man who shot Tillman III, also supported Luna’s statements that Tillman Jr. was known as a feared, high-level player in the drug game. The trial transcript shows that Simmons answered “Yes,” when asked if Bennett told him to shoot Tillman III and his associates because of whom Tillman III’s father is. Simmons pleaded guilty to his part in the Bennett organization’s crimes and is scheduled for release from federal prison in 2017.

“Jon Luna wasn’t just relying on the DEA memo when he said these things about Tillman Jr.,” recalls defense attorney Harvey Greenberg, who represented Jones in the Bennett case. “He also had Simmons’ testimony. Luna was trying to be frank about the background of the shooting and what prompted it. He was being open and honest, and telling what he knew to be true with evidence to back it up.”

Tillman Jr. did not respond to detailed messages left at his office and with his attorney, Greg Dorsey. U.S. Attorney’s Office spokeswoman Marcia Murphy says her agency would not comment about Luna’s statements regarding Tillman Jr., and also would not respond to questions involving the Bennett or Stansbury cases, because “we don’t discuss our charging decisions or prosecution strategy.”

Some of the politicians who have received campaign support from Tillman Jr.’s companies, however, did respond to City Paper‘s inquiries. “I did?!” Baltimore County Circuit Court Associate Judge Mickey Norman exclaims, when told his judicial campaign committee in 2005 got money from one of Tillman Jr.’s companies. “I honestly don’t know about that,” Norman says, explaining that judges’ campaigns are set up so the judges themselves are insulated from the fundraising process and have little, if any, knowledge of who’s supporting their candidacies.

Greenberg, however, is intrigued by City Paper‘s inquiries, suggesting that what Luna had to say about Tillman Jr. is already widely recognized among lawyers, law enforcers, and others familiar with the local crime scene. “Do you find Luna’s comments remarkable?” he asks. “Because I don’t.”