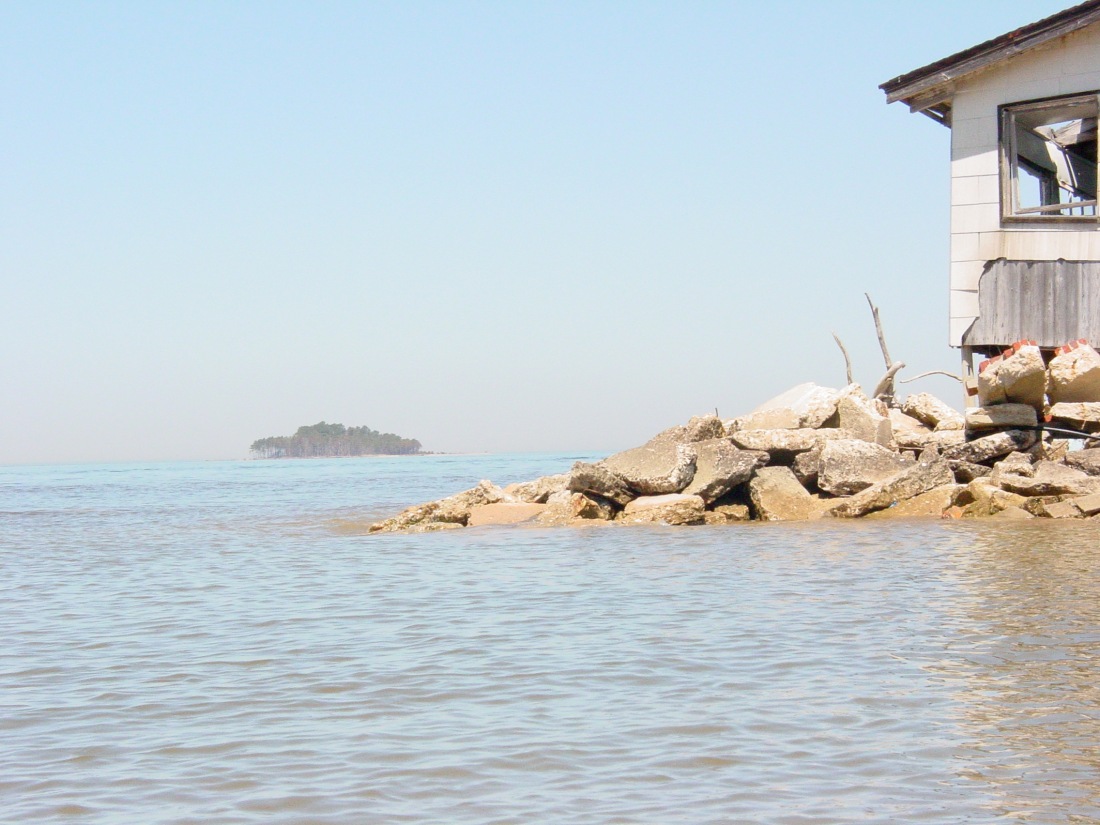 The white strip along the Barren Island shoreline looks like a sand beach nestled in front of a stand of pine trees, a perfect place to rest after the two-mile crossing of Tar Bay by kayak from the Eastern Shore’s Upper Hooper Island. Upon arrival, though, the beach turns out to be an eroding, wave-battered heap of old oyster shells that’s been spread along the island’s edge. The Chesapeake Bay has been licking away at the shell mound, unearthing its contents. Ten minutes of beachcombing yields a handful of weathered pottery shards and an arrowhead with a broken-off tip, likely artifacts of the Nanticoke Indians who once feasted here. Not bad for a brief and unexpected treasure hunt.

In time–a time that’s likely not far off–the treasures of Barren Island will be buried again, this time a yard or so beneath the surface of the bay. The island is going the way of Atlantis, sinking in rising seas like the rest of the Chesapeake coast. Scenes of destruction are dramatic where land is swallowed up in big bites: remnants of old buildings and bulkheads succumbed to storm and tide, forest edges tumbling directly into the bay, small soil cliffs formed at the water’s edge where fields and salt marshes surrender chunks of acreage to Neptune. This inexorable process, seen up close from the low-lying comfort of a shallow-draft paddling craft like a kayak or canoe, is eerily fascinating.

At Barren Island, which has historically lost an average of five acres a year, the seas have claimed tracts that the maps still show as part of the island, and visitors can paddle over what had been land just prior to the last heavy storm. The land loss here and elsewhere along the bay, seen firsthand from the water, is more palpable than on the many TV shows and documentaries that have been made about the effects of the Chesapeake’s rapid rise. One can literally reach out and touch the evidence, or stand on the bay’s bottom where, until recently, dry land had been.

Submerging islands like Barren and its northward neighbor, James Island (pictured), eventually will join sunken ones, like Sharps Island. North of James and a few miles west of the Choptank River’s wide mouth, Sharps used to house a hotel, a small farm, and a steamboat pier. For about 50 years now, the erstwhile island has been underwater, nothing but a shallow stretch of the bay marked on the charts as a nautical obstruction. (Which it is, judging by the 712-foot cargo ship that was stuck in Sharp’s shallow muck for a week this past winter.) Barren Island’s last human residents abandoned its farms, stores, school, and church a century ago; if nature continues its course, Barren, too, soon will be a patch of shoals.

A vessel, a destination, and a willingness to negotiate the logistics of getting there are all one needs for an outing to witness the action of the Chesapeake’s diluvial tendencies. The first part is the easiest for those who own or can borrow a kayak or canoe. Others must seek outfitters, a list of which can be found on the Maryland Department of Natural Resources web site at dnr.state.md.us/outdooradventures/guideeast.html. The last two parts–picking a destination and reaching it–are where the adventures begin.

William Cronin’s The Disappearing Islands of the Chesapeake is a good place to start when thinking about where to go. The book chronicles the histories of 42 bay islands as they’ve grown smaller and is illustrated with A. Aubrey Bodine photographs showing how things looked a half-century or so ago, more recent images of coastal destruction, and maps new and old to demonstrate erosion’s unrelenting hand. For more inspiration, Bodine’s books of photography, especially 1954’s Chesapeake Bay and Tidewater, are worthy companions when choosing a spot to head for. Having narrowed it down to an enticing destination or two, a copy of Delorme’s Maryland-Delaware Atlas and Gazetteer (Delorme.com, [800] 561-5105) will help pinpoint what roads to take to the closest boat ramp, and the location of a nearby campground to use as a base.

Once on the water, a portable, waterproof GPS device is useful. Not only can it (along with a handheld marine-frequency radio) serve as a crucial tool for nautical safety, but it will mark paths on its map screen to show the routes traveled. When kayaking around James and Barren islands, the GPS bread-crumb trails dotting the topographic map will appear largely over land. Paddlers using a GPS while hugging an island’s perimeter function as amateur cartographers, drawing its most up-to-date boundaries and thereby creating striking imagery of the impacts of sea-level rise on the bay’s coastline. Lacking a GPS, a nautical chart is an essential co-pilot.

The Eastern Shore’s Dorchester County is an obvious destination, as the effects of sea-level rise there are particularly dramatic. Blackwater National Wildlife Refuge is Dorchester’s main outdoors attraction, where extensive salt marshes are rapidly giving way to open water, and many old homes lining the county’s low-lying roads have been abandoned due to the Chesapeake’s intrusion. Just west of the county’s bay-facing shoreline are Barren and James islands, which are relatively easy to paddle to, weather conditions permitting.

Camping in Dorchester County is limited to three private campgrounds that mostly function as trailer parks, and two of them are on Taylor’s Island. Given its tiny marina–a mere notch on the coastline–the Taylor’s Island Family Campground ([410] 397-3275) is most convenient for a trip to nearby James Island, and it’s but a short drive to the put-in for paddling to Barren Island. Its small area for tent camping is in the marshy pine woods behind the last row of trailers, a short walk to the showers, a convenient store with a liquor license, a pool room, and a shack filled with video-poker machines. The most prevalent patrons here are beer-drinking men in baseball caps telling fish tales by fire pits, their boats nearby, hitched to pickup trucks. But paddlers are more than welcome to join in the fun.

The bay regularly beats up on Taylor’s Island, with land-moving equipment and piles of rubble along the campground’s battered bulkhead serving as reminders of the constant effort to hold back the tides. Just south of the campground, the coast is rimmed with pine trees fallen out of the woods hugging the high-tide line. North of the campground, miniature coves have been gouged out of the tide marsh by the lapping waves. At the end of the peninsula at the mouth of Oyster Bay, another mile northward, an abandoned, weather-beaten house is awaiting a storm to carry it away, and the farm fields next to it end at the water, with a sharp precipice: a smaller, darker cousin of the famous White Cliffs of Dover.

Bald eagles seem to like this stretch of Taylor’s Island coastline. They perch in high, dead pine trees, or on a ramshackle pier near a crude duck blind, pulling apart rockfish. When visitors get too close, they fly off, wheeling majestically in the air. Eagles are so abundant here, they quickly become a dime a dozen, and a pair of diving loons soon surpasses them as a more unusual sight.

James Island is about a mile into the bay from Oyster Cove, and from that distance, it looks to be forested. Author William Cronin found that it had first been settled in the 1660s, when it covered 1,350 acres and was attached to Taylor’s Island, but as of 1998, James was split up into three small remnants totaling less than 100 acres. It’s even smaller today, as becomes apparent while crossing the passage to it at the mouth of the Little Choptank River. Its remaining pine stands are sparse, and a recent storm knocked many of them into the bay, their needles still green as they soak on their sides in the brackish water. Some of the still-standing trees are gray and dead. Where the island’s salt marshes have fallen away en masse, one can imagine that the embedded pilings and timbers at the edges are all that remain of what was once a pier. So little remains today that it takes an active imagination to envision the island as having been inhabited once.

One of the James Island maps available on-line at Maptech.com shows a cemetery, and Cronin reports that 20 families lived on James in 1892. But the burial plots likely are underwater now, or the grave markers have sunken into a marshy area. The remaining landmass is too small to support the Sitka deer population that was imported to James in the early 20th century.

Gunkholing the coasts of the three little islands that now make up James is a telling erosion tour, but also part of the story are former pieces of the island that are now submerged off the coasts. The waves washing over them call them to attention, and one, a couple hundred yards offshore, is extensive and shallow enough to stand on. A sand-and-shell crescent beach on the north-facing side of the middle remnant is a draw for picnicking locals, and for beachcombers it yields occasional pottery shards and “mermaid’s tears,” pieces of sea glass worn by the waves.

Barren Island’s storied history involves family farms and commerce, like James’ does, but adds the dash of modern politics. The late, long-term Maryland comptroller Louis Goldstein, who died in 1998, once owned the island, and former Maryland governor Marvin Mandel was entertained at the since-submerged Barren Island Clubhouse. Cronin’s book has two photographs of the hunting lodge, one taken around 1950, looking grand with two tall pines standing as sentries at the base of the wide staircase at its entrance. The other, taken in 1987, shows it collapsing into the bay. He reports that its foundation still lives on, underwater, though so much of the island is now submerged it is hard to say where to find it.

Barren, which is home to heron rookeries and is visited by scads of migrating ducks, is now owned by the U.S. Fish and Wildlife Service. The federal government has designs on Barren and James islands–a plan to save them from Sharp’s fate by building new bulkheads and filling the shallows behind them with dredging spoils from the Chesapeake’s shipping channels. The U.S. Army Corps of Engineers last fall advertised its latest report on the plan, which would create a combined total of more than 2,100 acres of new land at James and Barren.

If the government’s plans end up forestalling the ultimate submergence of these islands for a while, Cronin’s book still describes 40 other disappearing bay islands to tour. Paddlers won’t soon run out of stops on an erosion tour. And someday, the rising tides will create new islands to explore in what today are uplands. In the meantime, the archeologically inclined can still try to claim those arrowheads before Neptune does.